The Kissing Sailor and Other Forced Kisses

Posted on October 5, 2012 by inmyinternest

The Kissing Sailor, or “The Selective Blindness of Rape Culture” | Crates and Ribbons.

It’s amazing. I had never actually looked at this picture carefully enough to realise that the nurse was being kissed by force. When it was pointed out, it was obvious that this was not an embrace of two lovers: the way the woman’s hand is clenched into a fist and the way the man is holding her around the neck “in a vice grip,” as the woman herself described it, show that this woman had not given her consent. She hadn’t even see the man coming until he suddenly grabbed her and kissed her. In the interviews she doesn’t seem to feel particularly violated but she doesn’t mention having enjoyed it, either. The point is, she didn’t get to choose whether she wanted to kiss that man or not. 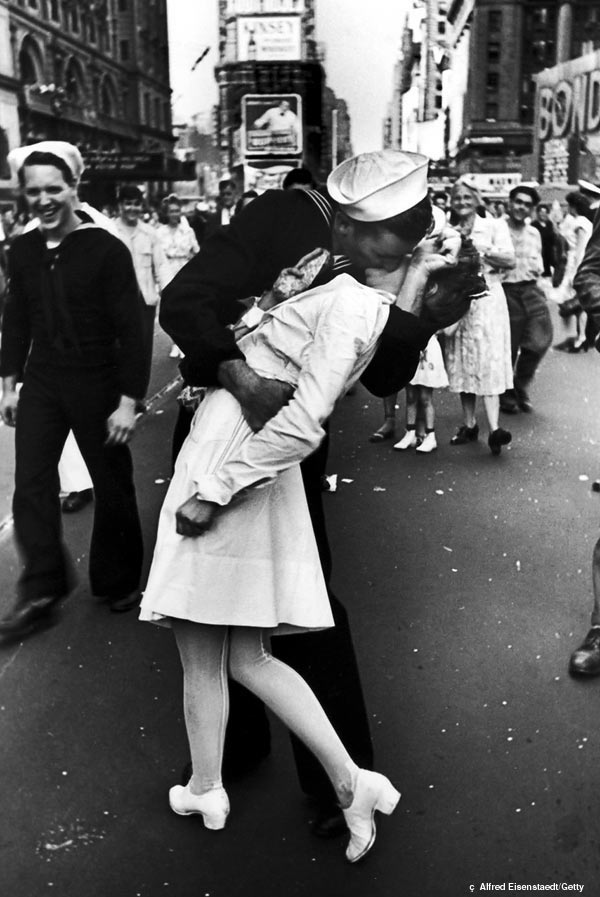 The willingness to ignore her lack of consent and to focus on the exultant feelings of the sailor at the end of WWII is, as Crates and Ribbons says, a symptom of rape culture, i.e. a culture where a woman’s consent is not important. When Crates and Ribbons pointed this out, dozens of people rushed to defend the sailor: those were special circumstances and the woman in the picture doesn’t explicitly say it was a traumatic experience for her. Maybe it was traumatic for her. Maybe she enjoyed it. Both options are slightly beside the point, which is that she didn’t get to choose whether she wanted to kiss that man or not. Strictly speaking, that icon of the end of the war portrays what would now be termed a sexual assault.

Don’t get me wrong! I’m far from crying “Rape!” A forced kiss is nothing compared to rape, and the sailor in the picture probably meant no harm. But now that I’ve seen the woman’s clenched fist and the sailor’s forceful grip, I cannot unsee it. It’s a different picture now. It’s not two people celebrating. Well, the sailor is celebrating but the nurse is shocked rigid.

To those of you who still don’t believe this kiss was non-consensual, therefore a sexual assault, one more picture. Look at her fist. It doesn’t look like she’s about to wrap her arm around this guy. It looks like she’s a wee bit uncomfortable, maybe thinking of punching him. Of course, no one can know for sure what’s going through her head in this moment but I’ve never made a fist while I’ve been kissed. But I have often clenched my hand into a fist when I’ve been groped in the street or on the dance floor. I haven’t actually punched anyone but when you’re assaulted, you form a fist without thinking about it. 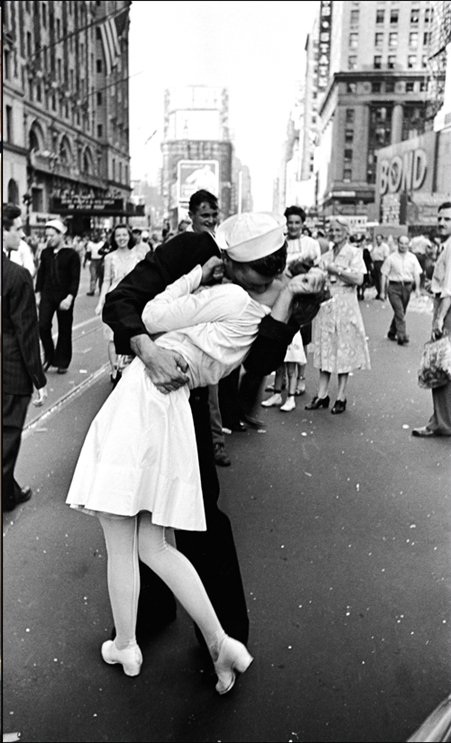 These images evoke mixed feelings in me because I’ve been kissed like that by a stranger. It happened at a nightclub. I was coming down some stairs and there was a group of guys at the bottom of the staircase.  I reached the lowest step and the next thing I knew, I was being held in an iron tight grip, and kissed firmly on the mouth. I was shocked and I tried to struggle, to no avail. Then I noticed that the guy was actually really attractive, and because I had had that one drink too many, I went along with it. He was a good kisser, what can I say!

So that turned out to be a not-entirely-negative experience, even though it was forced on me. I still would have liked to have a choice, though! It was only a coincidence that I happened to like that guy. I might have found him repulsive, in which case I would have struggled harder, no matter how many drinks I had in me. And if I had been completely sober, I wouldn’t have stopped struggling, no matter how attractive the guy was.

It’s really not a good idea to just grab a stranger and kiss them without a warning. There’s no guarantee that the surprised person is going to like it.

This is isn’t the firm stand I was hoping to make against forcibly kissing someone! I feel like having enjoyed a forced kiss seriously undermines the credibility of my condemnation of such sexual assaults. All I can say is, it was just a lucky coincidence that I found the guy attractive, and even then I was a shocked that someone would just grab me like that, and that there was not a thing I could do about it. My struggling had exactly zero impact. If I hadn’t found him attractive, or if I had been sober, I would have been seriously shocked about the incident.

The point is, even if there is the off chance that someone might enjoy a forced kiss from a random stranger, it’s best not to count on that. And then again, even if the kissing sailor isn’t the romantic picture I always thought it was, it’s still a powerful image and it’s okay to appreciate the joyful feelings and the probable good intentions of the sailor, even if the actual gesture was somewhat misdirected.

8 Responses to The Kissing Sailor and Other Forced Kisses